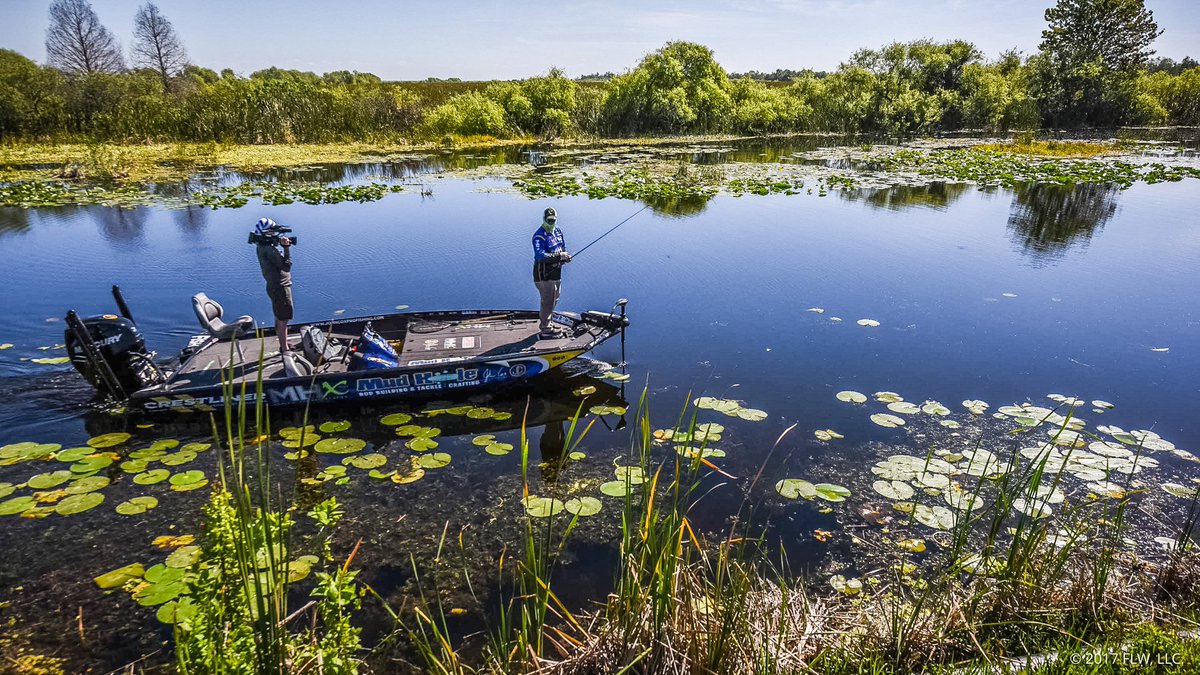 After my first visit to the Harris Chain during the BASS Open in January I felt really comfortable returning again.  I had visited every lake during t

After my first visit to the Harris Chain during the BASS Open in January I felt really comfortable returning again.  I had visited every lake during that event and knew how to get around and how much time it took to idle between lakes and how long it took to lock into Lake Griffin.  I also knew the importance of lighter sinkers and slower bait movement that is key to getting quality bites.

The first day of practice was spent on Lake Harris and Little Lake Harris where I tried my best not to hook any fish on a Zoom Ol Monster (not an easy task) around lilly pads.  I bent my hook down and buried it in the middle of the Ol Monster and even then it wasn’t easy to get the really good fish to drop it. I was around other competitors all day and was amazed at how many were setting the hook and catching bass during practice; some were even taking pictures of practice bass! I caught one 6 lb on a lipless crankbait in the grass outside of the pads and then put it away.

The second practice day I spent in the Dead River and Lake Eustis.  In Eustis I visited a community spot, the Gator Hole, where my practice partner Baily Boutries  and I took five big bites in one pass and he caught one over 5, we left immediately. I then plied the pads in the Dead River and didn’t get may bites but the ones I got were giants!  Even with a bent hook point buried deep in the Ol Monster and trying my best to shake him off a 6 refused to drop it and hooked himself!

The final day of practice I launched in Lake Griffin and even though this lake is where I ended up fishing during the BASS Open by noon nothing was clicking for me and I took out and moved back to Lake Harris.  Because of the running, idling and locking time involved in fishing Lake Griffin from the take-off site at Venetian Gardens on Lake Harris you need to be dialed in…I was NOT! Back on Harris the afternoon of the last day of practice I visited some bedding areas and found one area that had eight beds with some nice fish on them.

My game plan for the tournament was simple:  fish the pads in Little Lake Harris and the Dead River with an Ol Monster with a light RBS tungsten sinker on 14# Lew’s fluorocarbon line.  At the meeting I drew boat #139 paired with Jerry Hayden. That late boat number modified my plan a little. I decided to go to the bedding area first and fish the area blind; even though these Florida bass don’t normally pull up on the bed until the sun comes up they stay close to the bed in the deeper water.  Rigged with a six inch Zoom Lizard and light I cast toward the beds and fished the lizard slowly all the way back to the boat. I was rewarded with one bite: a 6 lb’er that came unbuckled beside the boat – a bad way to start the day. My second stop on the way to the pads in Little Lake Harris got me my second bite of the day on a Zoom Trick Worm with the same results – another 6 that got away.  Two big bites so far and nothing to show for it. the pads got me on the board with a limit on the Ol Monster one of which was over 5. Then it was on to the Dead River pads to finish up the day. There I broke off one over 6 trying to boat flip her on 14# line (bad idea), caught a 6 and lost another 6 or better. Total for the day: six big bites, only put two in the boat, a limit that weighed 15 lbs – bad execution but good enough for 32nd place.

For Day 2 I left in boat #25 with Brandon Barrett and with an early check-in went directly to Little Harris and then to the Dead River.  Finally a day fishing clean: six bites – six in the boat but zero big bites. My limit weighed only 8-7 and dropped me from 32nd to 60th…missed the money by seven ounces.