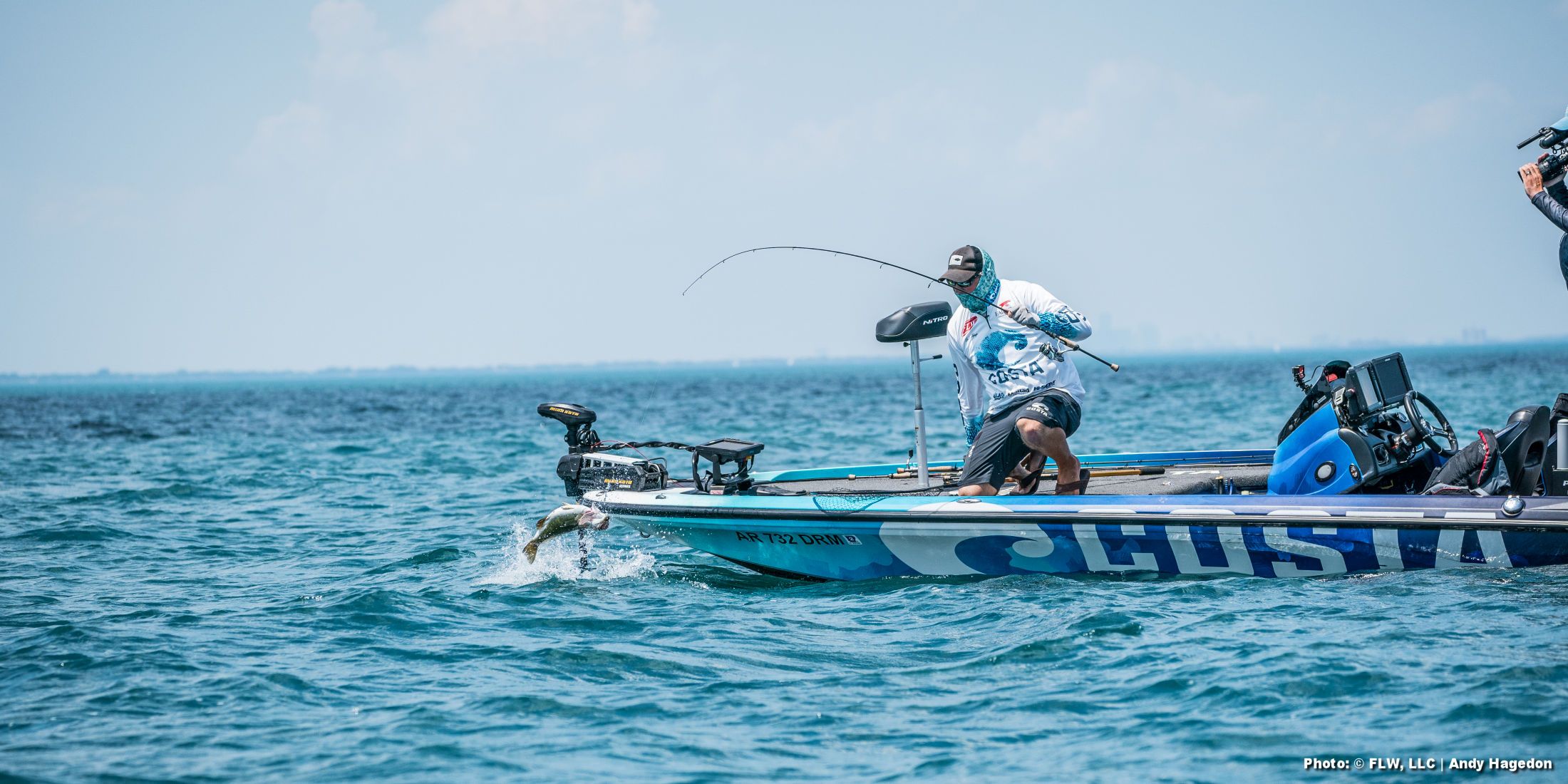 This was my first time to fish Lake Travis.  Located just outside Austin, Texas this canyon reservoir had been in a drought with low water levels for

This was my first time to fish Lake Travis.  Located just outside Austin, Texas this canyon reservoir had been in a drought with low water levels for many years allowing trees and brush to grow on exposed banks.  A couple of years ago the lake quickly rose about 40 feet and providing abundant cover for bait fish and bass in which to hide. During practice many anglers reported to be catching a ton of small bass but were have problems catching keepers.  My practice was amazing! I was around quality bass all three days and was getting bit shallow on a green pumpkin/blue Zoom Trick Worm and deep on a brown 1/2 ounce Zorro Booza Bug with a green

pumpkin Zoom Big Salty Chunk trailer.  Even with my hook bent against the shaft the hungry Lake Travis largemouth attacked my baits with a vengeance and refused to let go!  To say I was excited about this tournament is an understatement. After practice was over on Tuesday I formulated a game plan: start on my best shallow location and then go to my best deep location later in the day.

A cold front moved in on the final day of practice and by the time the tournament started on Thursday the water temperature had dropped five degrees but I decided to stick to my game plan and was certain that the bass that had moved shallow were committed and would not move.  I drew a fellow Kentuckian Josh Lockhart from Somerset as my co-angler on Day 1 and we headed to my shallow fish (first mistake) where I determined I could make them bite (second mistake) and I stayed there four hours (third mistake) before I finally gave up on them and headed to my deep fish.  When I got there I knew I was behind and pressed to catch up…fishing too fast (fourth mistake). Josh and I both had three keepers; mine weighed 4-4 and was only good enough for 135th place, very disappointing:(

For Day 2 I drew one of the “best ever” co-anglers, Frank Divis of Fayetteville, Arkansas and this time we headed to the deep fish to start (where I should have started on Day 1).  Frank caught a limit and I had enough hits but had a lot of execution problems and only boated four keepers that moved me up to 115th place. Lesson to be learned – React to changing conditions, fish in the present not in the past and pay attention to detail; especially line condition.

The bright spot of this event was a visit to Wiley Middle School in Leander, Texas on our day off.  The seventh and eighth graders were excited to see my TMNT rig and really excited to be with Michael